A basic understanding of the general audio levels mentioned in this article will help you avoid the common mistakes often made when connecting audio devices together. We are going to talk about three different general levels of audio signals.  The names of the three general audio levels are speaker level, line level and microphone level. For simplicity, the different audio levels are described in volts. For an understanding of decibel levels used in audio, see the articles on decibels starting here.

A speaker needs a few volts of electrical audio signal to make enough movement in the speaker to create a sound wave that we can hear. Small speakers need only a few volts, but large speakers need 50-100 volts to make a loud sound.

A speaker is connected to an amplifier. Think of your HiFi amplifier at home. What plugs into your amplifier? DVD player, CD player, radio/tuner, video camera. All these devices plug into the “line in” or “Aux in” of your amplifier.  “Line IN”, “Aux IN” and “Line OUT” all have an electrical audio signal at line level.

You are probably aware of the standard red and white leads used in HiFi equipment, these all use line level. Other plugs are also used for line level. Line level is about half a volt to one (½ – 1) volt. It is the job of the amplifier to amplify the half to one volt of line level, up to the 10 volts or more of speaker level.

Note: A common error is to connect plugs and sockets together just because they fit. Don’t assume audio level based just on the type of plug being used. The same type of  plug can be used for different purposes (and different audio levels).

Ok , so we have line level (about ½ – 1 volt) which goes into an amplifier to make it up to speaker level (about 10 volts or above).  What audio level do you think Mic level is? How much voltage do you think comes out of a microphone, as a result of you speaking into it? Answer: Stuff all!

The output voltage of a microphone is very low. It is measured in milli-volts, that is 1/1000th of a volt. A mic can give as little as 1 mV, or upto 100 mV, depending on how loud you speak into it. That is not very much. So what do you think is going to happen if you plug a mic directly into the line in of an amplifier? Answer: A very low level of muffled sound if anything.

Mic pre-amps are normally built into devices designed for connecting to a microphone. Equipment like an audio mixer, a digital recorder, a video camera or a computer – all these may have mic level inputs as well as line level input, or just a mic level input. . 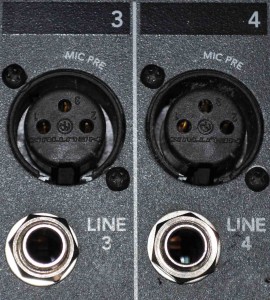 The picture on the right shows for each input on this mixer there is a line level input (labelled Line 3 and Line 4), as well as a microphone pre-amp (labelled MIC PRE).

Obviously a microphone plugs into the mic input, as the mic inputs are connected to the in-built mic pre-amps.

A line level device would obviously plug into the line in socket.

But what if your mixer (or camera/recorder) only has a microphone input, and you need to connect a line level source to it? This would result in the line level (½ – 1 volt) being connected to the input of the mic pre-amp. The trouble is, the mic preamp is expecting only a few milli-volts. The resulting sound will be very distorted as the mic pre-amp is completely overloaded.

So how can we do this? How do we connect a line level to a mic level input? We have to reduce the line level down to mic level.  The technical word for this is to attenuate the signal. As an amplifier amplifies, or boosts the signal; an attenuator attenuates, or reduces the signal.

You can buy attenuators at a music shop, they are called DI boxes. DI stands for Direct Injection, meaning you can directly inject a line level into the mic input without any problems. It is also possible to make an attenuator, possibly with variable attenuation, to cope with different levels. It is also possible to buy or build a fixed attenuator in a cable. This is a cable with resistors built-in to the plugs to attenuate the line level down to mic level – this is very useful for a video camera or portable digital recorder.

There are three main audio signal levels: mic level (millivolts), line level (around 1 volt) and speaker level (around 10 volts or more). The rule is, only plug speakers into the speaker socket of an amplifier; only line level into the line in of any equipment; and only mic level in the mic input of your mixer, camera or laptop.  The most common cause of  audio distortion comes from not understanding the different levels, and how to connect them all together.

Scenario: A keyboard (electric piano) located on the stage needs to connect to a mixer located at the back of the hall, with a microphone multi-core cable connecting between the two.

Issue: The output of the keyboard is at line level, and the microphone input at the mixer requires mic level. (There is also the issue of different plugs and balanced/unbalanced inputs but these are the topics of other articles).

Solution: Use a basic DI box available from most music or electronic stores. A DI box acts as an attenuator which reduces the line level of the keyboard to mic level for direct connection to the mixer (via the multi-core cable). The DI box also overcomes the issues of matching plugs and going from unbalanced to balanced  – so this is a perfect solution. This solution also works for connecting electric guitars, electronic drums and DVD players.

Scenario: The output (line level) of an audio mixer needs to connect to a digital camera or digital recorder which only has a microphone input.

Issue: The output of the mixer is at line level, and the microphone input of the camera/recorder requires mic level.

A basic DI box could be used, but this would require an input lead, and output lead and the DI box  – a lot to carry in your camera bag. A neater solution is to have a lead with a 40dB attenuator built into it. This will reduce the line level from the mixer by a factor of 100, which will bring the line level down to a reasonable mic level to connect directly to the microphone socket of the camera/recorder.

This article is based on one I originally wrote for my friends at CamcorderUser.net, and has been refined by their helpful comments.

In an earlier article we looked at the issues involved in connecting multiple speakers to one amplifier. In this article we look at some...
Read more
Home Speakers

I am often asked "How do I connect multiple speakers to my amplifier?" Before I answer, let's define what we mean by the word...
Read more
Home Speakers

In this article we look at how and when to connect 2 speakers in parallel or series. Both the theory and practical points on...
Read more
Home Connections

You may still have many video tapes that you like to play but find it hard to connect a VCR to your new flat...
Read more
Understanding Audio

A basic understanding of the general audio levels mentioned in this article will help you avoid the common mistakes often made when connecting audio...
Read more
Share
Facebook
Twitter
Pinterest
WhatsApp
Please Note: During the Covid-19 pandemic I'm busy with a number of streaming projects, and have very limited time to attend to this website. I'm currently taking up to a week to answer questions. Sorry for any inconvenience.