The main advantages of distributed speaker systems are:

The main disadvantages of distributed speaker systems are:

The basis of distributed speaker systems is similar to the way electricity is distributed. Power stations use step up transformers to distribute power as high voltage, which means low current, and therefore low line losses and thinner cables. Each town and/or street then converts this high voltage/low current down to low voltage/high current (through step down transformers) for use in your home.

Distributed speaker systems use a similar principle. The amplifier normally has a step-up transformer built into it, producing a high voltage/low current output. Then each speaker has its own step down transformer to convert the signal back to low voltage/high current. This allows the cable to be very long without having any significant line losses.

In North America the most common “high” voltage for distributed speaker systems is 70 Volts. This is because years ago, some states had laws stating that any cable with a maximum voltage greater than 100 Volts peak had to be installed in conduit. This was time consuming and costly to install. So they developed a system where the output voltage of the amplifier was a maximum of 100 Volts peak. This equates to 70.71 Volts RMS. This is commonly known as a “70 Volt line” speaker system. The principle is the same as for 100 volt line systems, but uses a maximum output voltage of 70 Volts. While 70 volt line systems are still the most common in the USA, some 100 volt lines systems are being used.

Less common, but still seen on some amplifiers and speakers are 50 volt line or 25 volt line settings. The principles are the same for all voltages, but the lower the voltage, the more current, therefore the shorter the maximum cable length without significant line losses.

In practice, many commercial amplifiers  and speakers have multiple taps. They may have 100 and 70 Volts, or 70 and 25 Volts, as well as 4 ohm and 8 ohm outputs for normal speakers (without transformers). Normally you should only use one output of a amplifier, that is, either the 100 volt line output, or the 70 volt line output or the 8 ohm output, not all at the same time.

Every speaker in distributed speaker systems needs to be connected to a step down transformer. This converts the high voltage level down to normal speaker level. 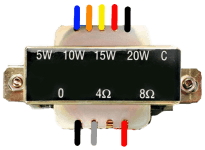 Most transformers have a selection of input taps. The example in this picture has taps for 20 Watts, 15 Watts, 10 Watts and 5 Watts. The feed cable is connected to the common and any one of the other taps. This allows the relative volume of the speaker to be set during the installation. For example the speaker in a high noise room might be set on 20 Watts, while the speaker in a small, low noise area might be set on 5 watts. Alternatively, the distance between the speaker and the target audience might be different, so the speakers further away can be set at a higher power tapping (or the close speakers at a lower power tapping). To help in determining the correct tap for each speaker in every situation, see my SPL calculator for distributed speaker systems.

As stated above, most amplifiers designed for distributed speakers systems have the output transformer built-in. They may have various outputs for 100 volts, 70 volt and/or 4 or 8 ohms (for normal speakers).

Most 70 volt amplifiers or 100 volt amplifiers also have an input mixer built-in. This allows convenient connection of microphones and line level inputs. Ensure the model you use has sufficient inputs for your current needs, and perhaps some spare inputs for the future.

For multi-zone systems, you can purchase an amplifier with 2 or 4 amplifiers and transformers built in the one box.

For a sample of the type of amplifiers available, here are links to Amazon’s range in USA or UK or Australia. Disclosure: If you buy through these Amazon links Geoff receives a small commission from each sale. 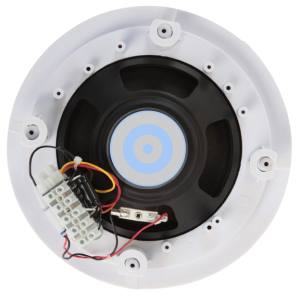 For a sample of the type of ceiling speakers available, here are links to Amazon’s range in USA or UK or Australia. Disclosure: If you buy through these Amazon links Geoff receives a small commission from each sale.

Speaker boxes come in all sorts of shapes and sizes. Many manufactures make a version of their cabinets with an integrated transformer. 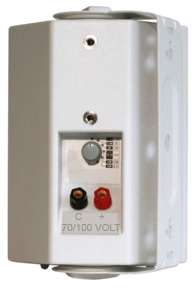 Connections are often by some form of speaker terminals. To change taps, simply rotate the switch to the desired power setting. Often these switches also have a position for 8 ohms (bypassing the transformer) – this makes them very versatile speakers for the installer. Speaker boxes are used where ceiling speakers aren’t practical, or where higher sound levels are required.

For a sample of the type of wall or cabinet speakers available, here are links to Amazon’s range in USA or UK or Australia. Disclosure: If you buy through these Amazon links Geoff receives a small commission from each sale.

Horn speakers are very efficient, but not very good quality. They are mostly used outdoors when coverage of a large, or high noise, area is required. For example in car parks, sports grounds, school yards and other outdoor areas. In the picture shown, the rear of the horn has a selector switch which needs a flat bladed screw-driver to operate. This is useful to reduce the likelihood of inadvertent changing of the settings after the install.

For a sample of the type of horn speakers available, here are links to Amazon’s range in USA or UK or Australia. Disclosure: If you buy through these Amazon links Geoff receives a small commission from each sale.

This is the fun bit, because there is no need to calculate the total impedance. To connect multiple speakers in distributed speaker systems, just wire them all in parallel and add up the total watts.

Example 1: A PA amplifier is rated at 120 watts @100 volt line. Therefore you could connect:

Example 2: A small church has a small 25 Watt (70 Volt) PA amplifier with 4 small speakers mounted in the church (2 down each side). They now want to add a speaker in a separate room for an overflow and creche area.

As shown, it is easy to add the individual speaker watts together. This is much easier than calculating the total impedance.This makes installation much simpler.

Sometimes manufacturers of speakers designed for distributed systems only mark their speakers with the impedance of each tap, rather than the Watts. Also, many impedance meters tell you the impedance, and you need to calculator the wattage.

In either case, you can use this simple calculator:

Following are some practical tips for installing distributed speaker systems:

Below are some of the major calculations used with distributed speaker systems (you can stop reading now if you are not into calculations).

Several principles of distributed speaker systems have been outlined above. A mathematical explanation of each principle is now given under the following sub-headings:

Adding the Power of Each Speaker

As an example, four 5 Watt speakers are connected together (in parallel) to a 100 Volt line amplifier.

That’s right, the impedance of a 5 Watt speaker with a 100 volt transformer is 2,000 ohms. Now to calculate the total impedance of four of these connected in parallel:

Now the total power of 100 Volts with a total impedance of 500 ohms can be calculated:

Low and behold, that is the same as simply adding the speaker watts together – which is much simpler!

Example 1: The total impedance of 200 watts of 100 Volt speakers can be calculated:

Now look what happens when that same 50 ohm speaker load is connected to the 70 Volt terminal of the amplifier:

Example 2: The total impedance of 50 watts of 70 Volt speakers can be calculated (remember 70 Volt line is actually 70.71 Volts):

Now look what happens when that same 100 ohm speaker load is connected to the 50 Volt terminal of the amplifier:

This principle is very handy to the installer if the power required by the speaker load is greater than what the amplifier can deliver. Simply move to the lower line voltage speaker connection (on the amplifier) and the power drawn is halved. The maximum power to each speaker is also halved, so the speaker output is halved, or reduced by 3dB, but the amplifier will not be overloaded.

A 8 Ohm Speaker will Overload a Distributed Speaker System

In the examples above we saw the speaker impedance of distributed speaker systems is reasonably high. For example a 5 watt speaker on a 100 Volt line has an impedance of 2,000 ohms. Even a 125 Watt load of 100 Volt speakers is 80 ohms. So imagine the load if the total impedance is only 8 ohms. It should be 10 times the load right? This scenario can be calculated:

That’s right, connecting a low impedance speaker (4 or 8 ohms) to distributed speaker systems will drastically increase the load on the amplifier.