In this article, we look at HDMI: what it is, where it is used, and what cables are used for HDMI. This is the fifth in this series of articles outlining the different video signals and cables used in home entertainment for connecting VCRs, DVDs, set top boxes, cameras and laptops to TVs and projectors. In the previous articles we looked at Composite Video, S-video, RGB video and Component Video.

HDMI is an acronym for High Definition Multimedia Interface. It is a way of connecting video, audio and data between AV equipment – all in one cable. The HDMI specification was released in 2003 by a group of electronic equipment manufactures including Hitachi, Panasonic, Philips, Sony and Toshiba.It is now widely used by over 1000 manufacturers.

HDMI is a smart interconnection. It allows (say) a DVD player and flat screen TV to talk to each other and adjust resolution and aspect ratio to the best settings for you. It also allows the flat screen TV to tell the source device to delay the audio if the audio is out of sync with the video.

The HDMI specifications get updated to enable it to work with new and future technologies. Hence there are versions 1.1, 1.2, 1.2a, 1.3 and 1.4. These numbers have confused many people. The confusion is unwarranted as the numbers are meant for the manufacturers of the equipment, not for someone simply connecting two devices together.

Deep color: is the ability to display trillions of colors rather than the just the 16 million colors which a normal screen is capable of – used by some photographers and graphic designers

Rather than worry about version numbers, we simply need to know what features we want, and then make sure they have those features.

For example: if you need a screen to be full high definition, and have the “deep color” feature – then simply look for those features. No need to worry about version numbers. (if really need to know, both 1.3 and 1.4 specification allow for deep color and full HD – now, forget that you know that).

Where HDMI is Used

HDMI is the best way to interconnect AV devices which use digital signals.

Most modern flat screen TVs and projectors have at least one HDMI input socket. Flat screen TVs often have 4 or more input sockets so you can connect all you digital devices by HDMI. An input socket looks the same as an output socket, but marked “Input” or something similar.

Modern AV receivers (surround sound amplifiers) have the capability of connecting to several HDMI input devices. These amplifiers will switch the video and audio automatically when you select each input. The switched output is then available to connect to your flat screen TV or projector.

The great thing about HDMI cables is you only need one cable to connect between any two devices. All HDMI cables have 19 conductors in them and carry all the digital video data and digital audio data in the one cable.

If your flat screen TV and DVD player and/or PVR also need an internet connection, then this is also available in the one HDMI cable. 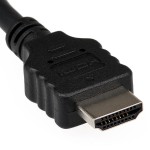 Some cable manufactures try to confuse us by saying their cables are HDMI 1.3 or HDMI 1.4 capable. This is marketing talk at its best, because a cable does not have any features of the HDMI 1.4 specification. However a cable must be able to perform to a specified standard. HDMI cables are basically rated according to the minimum speed it can transfer data over its length. There are only two speeds that HDMI cables are rated at: Standard and High Speed.

Each speed has the ability to also transfer Ethernet (network) data or not carry Etherent data. Therefore there are four types of cables to be considered. Each is outlined below with the standard HDMI logo used to certify the cable.

Standard HDMI Cable – Designed to be used in most home applications. The Standard HDMI cable can reliably transfer 1080i or 720p video as well as surround sound audio.

In summary, a standard HDMI cable will cope with all standard devices unless you require a resolution of 1080p or above (this will be explained later). A high speed cable is only required for 1080p or above resolutions, or 3D or deep color.

Having said all that, most retailers sell high speed HDMI cables with Ethernet for only a small cost increase over a Standard HDMI cable.  As a High Speed HDMI cable will work in all situations it is an easy way to future proof your setup. A cable marked HDMI 1.4 should be equivalent to a high speed cable, even if it is not marketed correctly.

Beware, some retailers of flat screen TVs charge a premium for HDMI cables – often in the $100-$200 range. This is because they have made little or no profit from selling the flat screen TV and so try to make a greater profit on the accessories. Shop around, high speed HDMI cables can often be bought for only $10-$20.

If you need to purchase a cable, here is a link to Amazon’s range of HDMI cables.

Disclosure: If you buy through this Amazon link Geoff receives a small commission from each sale.

There is no maximum length for HDMI cables, as long as they meet the required performance criteria over their length. That said, in practice, 20 metres (60 feet) is the maximum length generally available without using signal boosters or cable extenders. Two Cat 6 cables with appropriate convertor boxes are often used for 30 metres or more.

As electronic devices get smaller, there is a need for the plugs and sockets to get smaller. For this reason, along with the standard HDMI plug size, there is also a mini and a micro plug. These are used for laptops and digital cameras and other small devices. They still have 19 pins and the cables still need to meet the performance criteria to be a Standard HDMI or High Speed HDMI cable.

In conclusion, HDMI is great way of connecting digital electronic devices together. It requires just one cable between devices, and allows for the best quality picture and sound.

Share you experiences (good and bad) with HDMI cables by leaving a comment below, and we can all learn more together.