Technically, frequency is the number of waveforms generated in one second.

As an example, if you hit the middle C key on a piano, the strings in the piano will vibrate back and forward around 261 times per second. This produces a sound wave which repeats itself 261 times each second. Therefore the frequency of middle C is 261 cycles (of the sound wave) per second.

Rather than using “sound waves per second” or “cycles per second”, the word Hertz was adopted as the international SI unit for frequency in 1930. Hz is used as the shortened form of hertz. One hertz is the same as one wave form or one cycle per second.

We saw earlier that the musical note middle C has a frequency of  261Hz (261.626Hz to be more precise). On a 88 key piano the lowest A note is 27.5Hz. The highest A note is 3520Hz. The following table gives the frequency of each A note for each octave on the piano, starting with the lowest.

It is also interesting to note that the piano has a very wide range of frequencies compared to most other instruments. See the table below for a few examples (frequencies rounded to the nearest whole hertz).

The human voice also has a limited frequency range. The following table gives the approximate range of frequencies for different types of singers.

While all the above is interesting, instruments and voices don’t just produce one fundamental frequency for each note as listed above. They also produce what is known as harmonics. Harmonics are multiples of the fundamental frequency. For example, if you produced a sound at 1000Hz, there would also be sounds at 2000Hz, 3000Hz, 4000Hz and so on at various levels. The following table may help:

The point being, any microphone, amplifier and speaker system needs to be able to reproduce more than just the basic fundamental frequencies. Also the harmonic frequencies need to be considered when adjusting the tone of any instrument or voice. More on this in a later article.

It is generally accepted that the hearing range of humans is 20Hz to 20,000Hz (20kHz). While we lose the ability to hear higher frequencies as we age, 20Hz to 20kHz is generally considered to be the human hearing range. It would also be good if the frequency range of any sound system was also 20Hz to 20kHz. However, very few sound systems are capable of this full range – especially at the bottom end (the lower frequencies). Nor do all sound systems necessarily need to be capable of 20 to 20kHz – it all depends on the intended use (and budget). 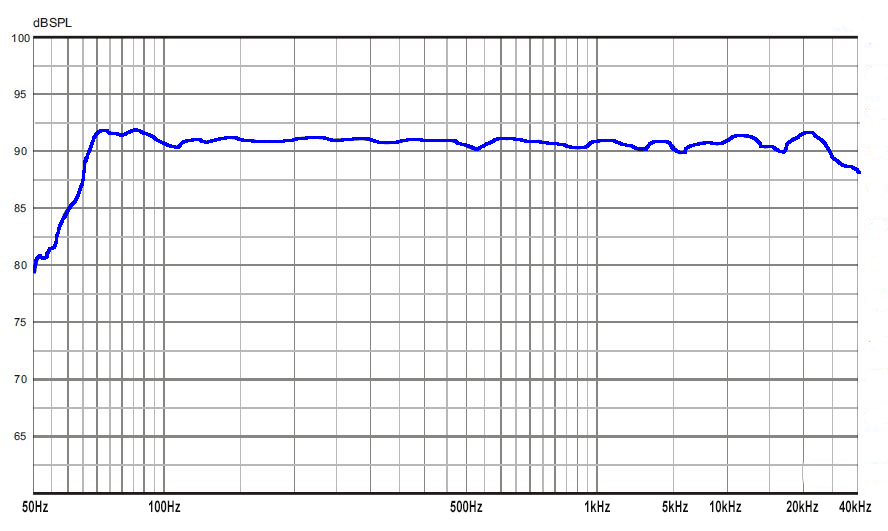 The first thing to notice is the scale at the bottom. On this chart it starts at 50Hz and displays numbers for 100Hz, 500Hz, 1kHz, 5kHz, 10kHz, 20kHz and 40kHz. Notice how it is not linear, but rather it is spread out over the lower frequencies and bunched up more over the higher frequencies. This logarithmic scale also closely matches the spread of frequencies we saw when looking at the piano frequency range.

The blue line is indicating the frequency response of the speaker under test. This speaker has a fairly flat response across the entire audible frequency range, with a drop off at the bottom end around 70Hz.  You may see graphs like this for speakers and microphones. They are useful to alert us to any major troughs or peaks in the frequency response which will need to be dealt with for good sound – mind you, if there are major peaks or troughs, you will probably hear that it doesn’t sound right.

This introduction on audio frequency gives a basic understanding of the principles involved. This topic will be expanded when looking at equalization and system setup.

In an earlier article we looked at the issues involved in connecting multiple speakers to one amplifier. In this article we look at some...
Read more
Home Speakers

I am often asked "How do I connect multiple speakers to my amplifier?" Before I answer, let's define what we mean by the word...
Read more
Home Speakers

In this article we look at how and when to connect 2 speakers in parallel or series. Both the theory and practical points on...
Read more
Home Connections

You may still have many video tapes that you like to play but find it hard to connect a VCR to your new flat...
Read more
Understanding Audio

A basic understanding of the general audio levels mentioned in this article will help you avoid the common mistakes often made when connecting audio...
Read more
Share
Facebook
Twitter
Pinterest
WhatsApp
Please Note: During the Covid-19 pandemic I'm busy with a number of streaming projects, and have very limited time to attend to this website. I'm currently taking up to a week to answer questions. Sorry for any inconvenience.